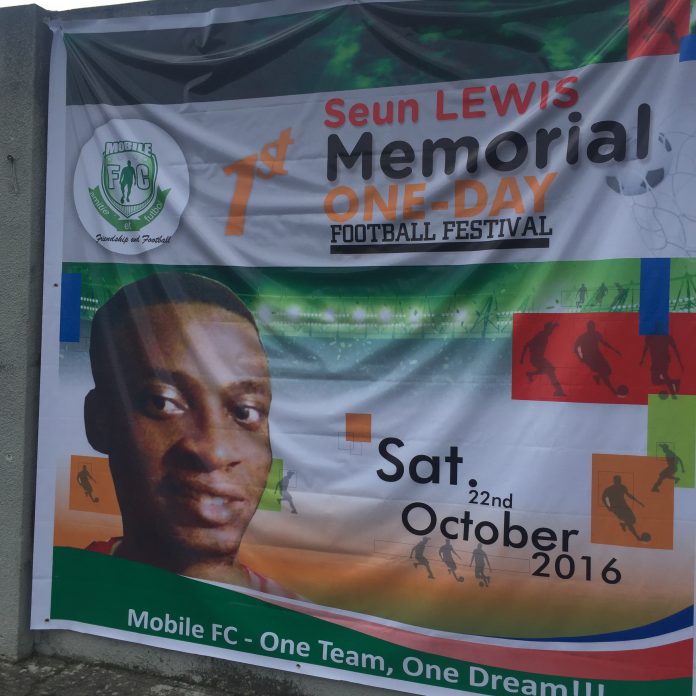 A year ago the world lost an all round gentleman. Seun Lewis is your ever dependable guy who always wore a smile whenever he was approached. He was a big football fan and a die-hard Arsenal fan at that ( not the annoying type though, lol). We always took footy jibes at each other but you would be amazed to find out that it went beyond the Arsenal versus Man Utd rivalry. We also took the banter to the Serie A. Seun loved Roma and Francesco Totti while I am a massive Juventus fan.
Seun died October last year and to remember him a one-day football tournament was organized in his honour on Saturday the 22nd of  October, 2016.
Seun played football every Saturday morning and he was a registered member of a football team called Mobile FC. The trophy for the football tourney was contested for by Mobile FC Team A and Team B , Corporate Ballers and Konga (where Seun worked before he died).
The Legacy (Astro Turf) Pitch of the National Stadium in Surulere, Lagos played host to this exciting football tourney. Mobile FC Team A played against Corporate Ballers in the opening game of the tournament. Team A won the fixture 2-1 to clash with Mobile FC Team B in the final who beat Konga FC 1 nil in the other game. The 3rd place game between Corporate Ballers and Konga FC ended 6-1 in favour of Corporate Ballers and you would wonder what happened to them in their first game going by their display.
The final between Mobile FC Team A and Team B was an eagerly anticipated one following the banter between both sides at the touch line as the third place match was going on. The Team A seem to make the most noise and one would expect they would carry the day. Before the final was to kick-off Seun’s parents were introduced to the crowd present and a minute of silence was observed in the memory of the deceased.
Team B however won the game 2-1 though with a cheeky hand of god goal by the stocky Team B striker who troubled the defense of both Konga and Team A on the day.
It was to be Mobile FC Team B’s day and their striker who scored 2 goals to be named top scorer of the day was also named most valuable player of the tournament. The trophy was presented to the winners by Seun’s dad. The day witnessed a massive turn out with a lot of family and friends present.
I must commend the Mobile FC family for coming up with this great initiative of honoring Seun Lewis and I hope it has come to stay. The Sports Vision crew which comprised of Bode Bruno and Tony Ajulu added flavour to the successful one-day football fiesta by running commentaries as the games went on though Messr Deji Omotoyinbo made a cameo appearance.
A reception was held at the Old School Hall of the National Stadium after the trophy presentation.
Thanks for your time guys…… BLESS !!!