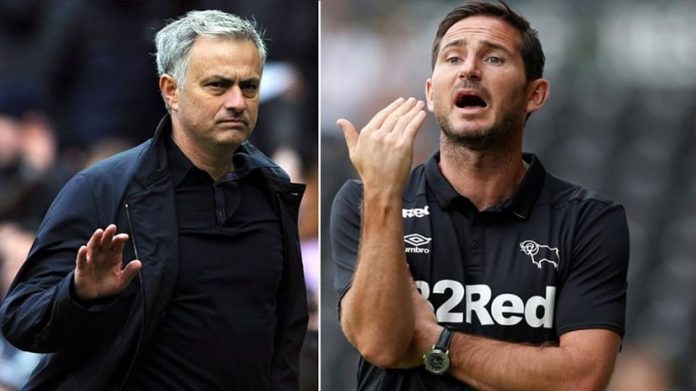 The big boys from the English Premier League joined the guys from the low tier of English football in the Carabao Cup today and my beloved Manchester United hosted Derby County managed by Frank Lampard who used to play for Jose Mourinho when the latter was in charge at Chelsea. I was already saddened by the news that it was not going to be televised in this part of the world but I was going to find a way, maybe I should not have bothered.

I got to stream the match and it was so inconvenient because it was a few seconds slow but hey it was my team that was playing, I would do anything possible to catch the game. Before I could settle into the game after all the buffering and slow internet at the start, United had taken the lead through Juan Mata in the 3rd minute.

Not a bad goal for someone who barely starts a game, but he (Mata) could have grabbed a second for the Red Devils but Scott Carson in goal for the Rams made light work of the effort to keep the score at 1-0. The game wore on with United dominating and they kept fluffing their chances up until half time. 1-0 and it was Man Utd who led at half time.

The second half was looking even up until Harry Wilson leveled scores from a free-kick in the 59th minute, a beautiful one at that. Would I have blamed Sergio Romero for terrible positioning? Nah, let me see it as a well deserved goal for the Rams. 1-1.

Now should I have called the incident that led to Romero being sent off (he handled the ball outside his box) a moment of madness or an error that could have been made by anybody? I will pick the former. Nobody knows how much I love the Argentine, if De Gea had left this season, last season or season before last  I would have backed Romero to be the number one goalie for the Devils all day, everyday and three times on Sunday.

The Rams took the lead through Jack Marriot in the 85th minute and I closed the browser immediately. It was over, well in my books at the time and I was chatting with a friend when my flash score app alerted me of a Maroune Fellaini equalizer. I had to re-open the browser to continue the game. Diogo Dalot, remember him? The kid I said could play from the Champions League tie against Young Boys? Yes that one, he crossed the ball for Fellaini to score. 2-2 and shortly after it was full-time, Even Stevens.

The game went straight to penalties and United lost 7-8 all because Phil Jones could not be calm before taking his spot kick. Lampard beat his former boss at first try.

Well I wont have to worry about wasting data for the Carabao Cup again this season. Did I hear Liverpool is playing Chelsea tomorrow? How is that my concern?

Thanks for your time guys. Stay BLESSED!!!