There have been few surprises at this 2018 World Cup, well I personally was surprised that Egypt lost to Russia because I tipped them to make it to the next round alongside Uruguay. The Pharaohs have been knocked out and have only pride to play for against Saudi Arabia whom would also have same thing in mind. Morocco also joined their African brethren in the elimination plane after losing 1-0 to Cristiano Ronaldo oops sorry Portugal yesterday. Ronaldo bagged his and Portugal’s 4th goal of the tourney making him top scorer and making Portugal joint Group B leaders with Spain who also beat Iran 1 nil. Iran still has a chance to make the knock out stage if they beat Portugal in their final group game. A Big IF.

Now this is a game I was interested in. Not that I was expecting an interesting game (though it turned out to be), I just wanted France to nick all 3 points and be assured of a place in the second round of the World Cup. They are one of the 4 teams I am rooting for and if anyone saw the Peru versus Denmark game, you would not write-off the Peruvians. Peru however was tough nut to crack for the French side on the day.

The Peruvians were quite a handful dominating possession in the first half though coming up short with chances created and shots at goal. All possession and no goal simply means you are just a showoff. The French side took the lead in the 34th minute after an Olivier Giroud effort was deflected to the path of Kylian Mbappe who wasted no time in slotting home. The effort also earned the Mbappe the youngest goal scorer in a senior World Cup tourney. France took the lead into the break. 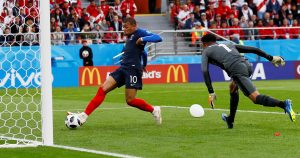 Peru started the second half started the second just as they left off from the first but they were more purposeful this time around. They struck the bar in the 50th minute and they were relentless in their efforts of getting an equalizer but the French side were cautious in approach. The game ended 1-0 which means France are through to the next round and Peru eliminated.

Denmark and Australia played a 1 all draw in the other game of Group C, and both sides have a chance of making it through to the next round.

Next up for the Diary is the Nigeria versus Iceland game. Can’t wait especially after witnessing the Croats annihilate Argentina to throw the second spot open in Group D.

Thanks guys and stay BLESSED!!!