For the first time since 2008 where Manchester United defeated Chelsea at the Luzhniki Stadium in Russia via penalties, we witness another all English Champions League final. Liverpool overcame Barcelona at Anfield, England to qualify for their first Champions League final since their 2007 loss to A.C Milan. Tottenham’s late resurgence against Ajax on Wednesday night at the Johan Cruijff Stadium in Holland helped capped a fairytale season for the North London based side.

If football was a script then there has been none better written in a long long while, not since the Liverpool comeback against A.C Milan in 2005. Speaking of Liverpool, despite a wonderful display at the Camp Nou against Barcelona last week Wednesday they lost 3:0 and it was believed that they were out and should just put the remainder of their energy in ensuring they won all their remaining League games and pray Manchester City falter. No, Liverpool Manager Jurgen Klopp had other ideas, not only did he set his team up to win the next league game they played beating Newcastle though in controversial circumstances, the football world is braced for another interesting end to the English Premier League (EPL) since the 2012 season where Sergio ‘Kun’ Aguero’s last second strike against Queens Park Rangers shattered the hearts of Manchester United fans to gift Manchester City their first ever EPL title.

In the second leg match up of the Liverpool versus Barcelona Series, Liverpool took the game to Barcelona at the blast of the whistle, putting pressure on the Spanish side and it paid off as early as the 7th minute when Divock Origi pounced on a shot taken by Jordan Henderson which ricocheted off Marc-Andre ter Stegen in goal for Barcelona to slot home for a 1 nil Liverpool lead. The first half did not witness any more goals. 2nd half substitute Georgino Wijnaldum scored a brace to level scores 3:3 on aggregate before Origi’s 79th minute strike gave the Kops the advantage with a 4:0 lead on the night and 4:3 aggregate lead. Barcelona needed a goal to pull through to the final but the sturdy Liverpool defence marshalled by Virgil Van Dijk ensured that didn’t happen. 4:3 aggregate win over Barcelona sent Liverpool to the Champions League final in Madrid.

Tottenham Hotspur had lost 3 games in a row including a 1:0 loss in the first leg of their Champions League tie against Ajax Amsterdam and they faced the Dutch side in the second leg with the return of tireless and industrious player Son Heung-Min to the squad being the only source of joy they had as Harry Kane was still out injured and Dele Alli not being in the best of form. It was going to be a difficult task, Ajax had taken the scalp of Real Madrid and Juventus in the second round and quarter finals respectively. They are a youthful side but fearless in approach, it seemed they were going to conquer Spurs again and it did look like it after going 2 goals up in the first half to have a 3:0 advantage on aggregate.

Whatever Mauricio Pochettino told his lads at half time definitely was the pivot to their resurgence in the second half with a Lucas Moura hattrick handing the North London side a spot in the Champions League final via the away goals rule after the game ended 3:3 on aggregate. This is going to be Tottenham’s first ever Champions League final appearance and they face fellow English side Liverpool on the 1st of June, 2019 at the Wanda Metropolitano Stadium in Madrid Spain which is where La Liga giants Atletico Madrid play their home games.

I don’t know what the stats are but I can place bets on my life and I know I will win, that this would be the most watched Champions League final in football’s history. Even if it was going to be played at the biggest stadium in the world which is the 1st of May Stadium in North Korea with a capacity to accommodate 150, 000 (One Hundred and Fifty Thousand ) people, it would still be overfilled.

Thanks for your time guys and congratulations to Liverpool and Tottenham Hotspur on making it to the Champions League final. Our focus is now on Sunday where the final league games of the EPL would be played and the title winners decided.

Retelling sports with a goal in mind!!! 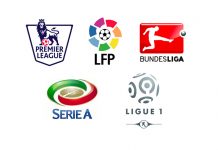 MY BIRTHDAY, HOW HE MET HER & MY LAPTOP WAHALA